“Brexit will never happen” is what a prominent fund manager told me while we exchanged bullish market views a couple weeks ago at a social gathering. I was a bit surprised at how emphatic the person was about Brexit, but it was understandable. I responded with my favorite behavioral finance quip about investors’ tendency to be overly fearful and risk averse at times when in fact probability favored a rising market. We both chuckled and seemed to have it all figured out. Well, as we all watched events unfold Thursday and into Friday, Brexit did happen and the market did go down. Much to my chagrin, I was faced with the difficult thought of having to reassess my bullish position. But, as investors, this is a painful but necessary exercise if we hope to survive inevitable bear markets. So, the question is, what does Brexit mean? The answer is, no one knows. Could it be the end of the European Union and the beginning of years of financial and political chaos in Europe which would undoubtedly wreak havoc with global markets? Or is it the event that forces the EU to reorganize itself and take serious measures to ensure fairness among its members? Again, the truth is that we simply don’t know yet. What we do know is that financial markets responded swiftly on Friday by knocking down the equity markets of all parties involved and dropping the value of the British Pound a staggering 8% versus the dollar. So while the U.K. has decided to head into the unknown in search of better arrangements and perhaps to find its former self, financial markets have already made some of its future known. And that future is not bright.

It is the financial realities that markets have delivered already that I believe will force the U.K. and EU to come to some sort of amicable agreement. Until the situation fully plays out, all we can do is to take a look at how market reactions may affect the principal participants’ (U.K. and Germany) motives. For the U.K., which is a consumption based economy like the U.S., a depreciating currency is like a tax on its citizens as imports become more expensive. Then, from the Bank of England’s perspective, a rapidly depreciating GBP could theoretically create hyperinflation, a situation in which the BoE would have to aggressively hike rates to thwart capital outflows and inflation. So Friday’s dramatic FX losses against its major trading partners will certainly have everyone’s attention. In terms of trade so far this year, Germany and the U.S. were the U.K.’s top trading partners to which the U.K. is running a 6.4 billion GBP deficit. A deficit that will get more expensive the further the pound drops. Now from Germany’s perspective, in 2015, the U.K. was their third largest export destination behind the U.S. and France. So we can see how it would behoove Germany, the de facto leader of the EU, to keep communications open and friendly with the U.K.

As the realities of the vote start to reveal themselves, it seems there are many in Britain who are experiencing, if you will, a kind of voters’ remorse. For example, Cornwall, a county in the south of England whose economy is based primarily on fishing and agriculture, received roughly 60 million GBP yearly in financial aid from the EU. Prior to the vote, the Leave campaign promised that funding would still be in place post a leave vote one way or another. Now that the vote has happened, Cornwall finds itself looking at a possible interruption of these funds as the transition takes place. It’s all fun and games until the bill comes. All this said, Brexit remains an extremely fluid situation as the idea of a new referendum is already being passed around and gaining momentum. Given the economic realities of what has happened so far, I would expect a softening of rhetoric from the Leave campaign and for the remaining political leaders in the U.K. to work with the EU in making as smooth a transition (if any) as possible to the benefit all parties. Translation: Now that real damage has been done on all sides, cooler heads should prevail and market volatility should subside.

Now moving to situations on this side of the pond, let’s look at a significant data point we got in the midst of all the Brexit hysteria last week, which was weekly unemployment benefits claims. Last Thursday’s initial claims print came in at a very low 259,000 with continuing claims getting close to their cycle low at 2.142 million. While labor market health has been under some scrutiny since last month’s “weak” nonfarm payroll (NFP) print of 38,000, I’m taking issue with both the scrutiny and the “weak” description. Since the labor market has essentially reached full employment and the economy is in a slow but steady growth mode, it is incorrect to expect 200,000 monthly job growth into perpetuity.  An excellent assessment of the “weak” payroll report and the labor market is given here by Stephen Williamson of the St. Louis Federal Reserve Bank. In short, Williamson says the labor market is doing just fine.

What I would like to focus on here is how well the weekly claims data does in capturing the cyclical nature and health of the labor market. Unlike NFP data which is based on statistical sampling, weekly claims data is based on the actual total numbers of people seeking unemployment benefits. While NFP data still does a great job in describing the composition of the labor force, claims data is the most accurate and timely gauge for judging true labor market health. The reason for preferring weekly claims data is that when cyclical industries hit slowdowns and lay people off, those layoffs show up almost immediately in the initial claims data. For people in cyclical and / or high turnover industries like construction, leisure & hospitality, unemployment benefits act as a lifeline until new work can be found. The Bureau of Labor Statistics also put out a report which shows that within initial claims data you have not just cyclically unemployed persons, but also workers who may be intentionally filing claims once they meet minimum work requirements. Depending on how much of the latter group is true, the labor market could be even tighter than the data suggests. 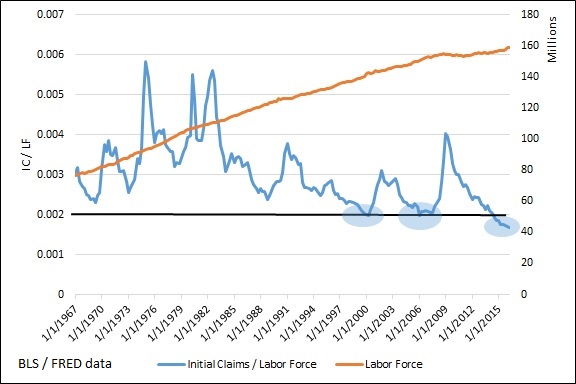 The key takeaway here is that regardless of nonfarm payroll growth, we know that cyclical industries are keeping people employed and that employment is the backbone to a healthy job market and, in turn, a healthy economy.

A market update would not be complete without a look at some recent services sector data, which we also got last week. On Tuesday, the Federal Reserve Bank of Philadelphia released its Nonmanufacturing Business Outlook Survey for June which is the services version of its highly regarded manufacturing report. Unfortunately, most people missed the release because it was not on the economic calendars of any of the major news sources. This is truly a shame because the report is one of the few metrics provided on the services sector by a regional Fed bank and deserves to be followed. As I’ve written before, services data just doesn’t get the coverage it deserves in financial media. That said, the report showed solid gains in employment and modest growth in sales and new orders, which is in line with our steady economy.

The above is all well and good, but the real issue is where are we headed now? Unfortunately, like back in February when we were tied to oil, we are now tied to Brexit. Given the news over the weekend, it seems that the Leave campaign has bitten off more than it can chew and is scrambling to control an unexpected victory. Already there is enough of a backlash from the Remain campaign that it may be able to thwart an actual Brexit. I think the fact that so many people in England, Northern Ireland and Scotland want to be a part of the EU and believe in a united Europe that it bodes well for the survival of the EU. Ultimately, I believe agreements will be reached and the bull market will continue. Otherwise, I would certainly hate to run into my fund manager friend again and have to share some humble pie.