“Man is a perpetually wanting animal” is a quote from the seminal work A Theory of Human Motivation by the famous behavioral psychologist A.H. Maslow in which he succinctly captures and predicts consumer behavior. It is this perpetual wanting which also defies many economists’ fears of a deflationary scenario where consumers hold off purchases in hopes of lower prices. The fact is, if people have the ability to consume, we will. This allows us to see consumption as mostly a function of ability (employment) because the motivation to consume is already there. Using Friday’s healthy retail sales print as a starting point, we can see that consumption has increased as the economy and labor market have strengthened even as some goods prices have declined. For example, in the last cycle, real retail sales grew 9.8% from trough to peak. Whereas in the current cycle, real retail sales are up 20.5% and still climbing from the trough. Factoring in the significant price declines in commodity prices and some consumer items like electronic goods, the large rise in sales shows that overall consumption is meaningfully higher.

Even using an apple to apple comparison and keeping the cycles at the same length or using the same 2001 trough would yield a 17-19% gain for the current cycle. So you can see how robust this cycle really is. Supporting this increase in consumption has been a tighter labor market as evidenced by declining weekly claims data throughout both periods. Claims are currently sitting at an all-time low when you factor in the growth of the labor force. 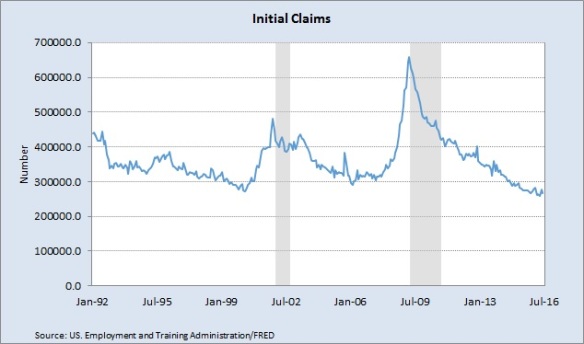 Looking at the above claims chart, it’s very difficult to say that we are in recession or even nearing one as many in financial media seem to think we are. We would need to see claims levels rise nearly 60% to the 400,000 area for the recession alarms to go off. The good news is that we can watch this on a weekly basis and adjust our thinking accordingly.

The true driving force behind employment and thus consumption is obviously business activity. For a services based economy like the U.S., the Ism® Non-Manufacturing Survey (NMI) is the best gauge we have. The most recent report for June came in at a solid 56.5 up 3.6 points from its last reading. Within the NMI, the business activity index was up to a high 59.5 while the new orders component was even better at 59.9. These are both very healthy levels and should help to bring up the employment index going forward as well. 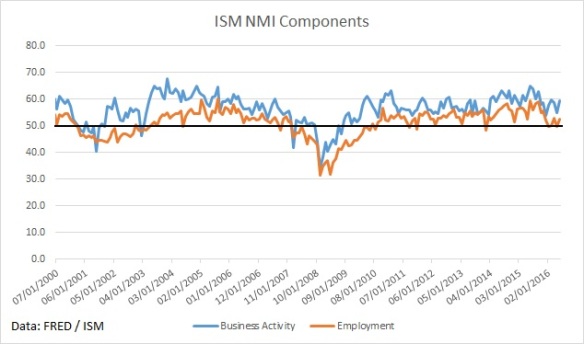 Looking at the NMI in context of claims and retail sales data, it’s safe to say that we have an economy that is steadily moving along. Adding in the better-than-expected results for Industrial Production and Capacity Utilization which we got last week, we can see the previously lagging manufacturing sector starting to catch up. While manufacturing represents a small part of the economy, it will still be welcomed assistance for the consumer and services sectors.

As we head into the week, we have a lot of earnings reports and economic data points to look forward to. Monday morning, we have Bank of America and IBM reporting earnings. Both have had their woes but also may have turned a corner. So far JP Morgan and Citigroup have posted strong quarters so BAC shouldn’t be too far behind. There will be plenty more technology, industrial and consumer names reporting to fill out the rest of the week. On the economic front, we have several housing market data points and some manufacturing data as well. Unfortunately, we have a new macro situation in the form of the Turkey coup which will add extra volatility in the days to come. However, as of this writing Sunday night, the futures have just opened and the S&P’s are up 6 points from the close, which pretty much says the real turkeys are the folks that were selling everything at 4:45pm on Friday when the Turkey news broke. Well, let’s see what this week brings!