“Late cycle” is one of the most frequently used terms in financial media for describing the current state of equity markets, the overall economy and the imminent likelihood of recession. While “late cycle” is a term that invokes credibility and financial acumen of those who use it, it also reflects some behavioral biases that can lead to poor investment decisions. Behavioral biases are concepts that seek to explain why investors make decisions that don’t always follow the most likely economically advantageous path and are also part of a branch of economics known as Behavioral Finance.

In this case, “late cycle” represents a familiar and credible term that has an established place in financial jargon from work done by the National Bureau of Economic Research who also officially determines when recessions begin, end and thus measures the length of business cycles. According to NBER data, since World War II, the average business cycle has lasted about 6 years. It’s this 6-year assumption that permeates through financial analysis and has taken on significant meaning with investors primarily from its prevalent use in financial media. Because the 6-year time frame rests so well in investor’s minds, it’s easy for it to be given a greater probability of success than it deserves and can sway investment views towards an irrational outcome. In behavioral finance terms, this is called conservatism bias and it’s a situation in which investors hold on to prior beliefs and fail to change those beliefs when new information has been presented. This bias can also result in investors tending to overestimate unlikely events while underestimating the likely ones. So, while the “late cycle” assumption gets more attention and seems to make a plausible argument as to why a recession (the unlikely event) is imminent, it’s actually a continued expansion (the likely event) that is justified by the current economic data.

Before getting to the economic data that supports a continued expansion, we can look at the NBER data itself and take issue with the 6-year cycle assumption. The period that the assumption is based on is a time in which the economy also made a significant transition from a manufacturing and exports base to a services and consumption base. This transition has allowed for expansions to be more sustainable as internally driven consumption is less susceptible to exogenous economic shocks and makes for longer cycles. That said, if we group the existing NBER cycles to reflect this transition, a transition which is also supported by the dramatic growth in services employment, we can see how the average business cycle is significantly lengthened. 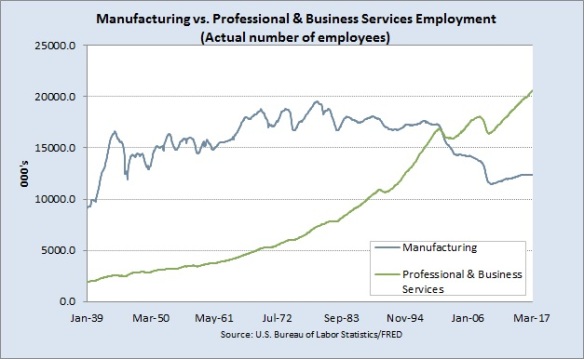 Adjusting for the transition to a services based economy, business cycle length has more than doubled and is set to get even longer as the economy becomes more services and consumption based. The key takeaway here and the best way to manage behavioral biases is to stay focused on the actual data. It’s the data that determines when a recession happens, not the calendar.

Moving on to the current economic data that supports a continued expansion, we have employment and business activity at the forefront. While economists throughout the street debate whether we are at full employment or not (my view is that we are), the fact remains that unemployment remains historically low. Weekly unemployment claims, which are an excellent proxy for the abundance or lack of cyclical work, are down at levels not seen since the 1970’s. When businesses that are most susceptible to economic slowdowns begin to experience a drop in business and let employees go, it is seen almost immediately in unemployment claims data. This is because unemployment benefits are a lifeline for people who work in these cyclical industries and are claimed as needed. An important aspect of claims data is that it is hard data which is based on the actual number of people needing assistance unlike the survey based data that drives most other labor market metrics and are susceptible to statistical errors. That said, as shown in the chart below, there has been no significant prolonged uptick in unemployment claims this cycle. 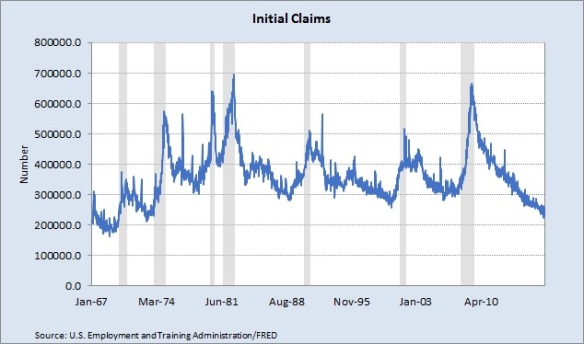 In an effort to try and project where unemployment claims might be headed, we can look at them in the context of job opportunities that are available as presented in the Job Openings and Labor Turnover Survey (JOLTS). JOLTS is also known to be one of Fed Chair Yellen’s favorite labor market metrics so it certainly warrants attention. By plotting job openings against claims data, we can see how the two series have fed off each other in past cycles and how record high job opening amounts are allowing claims to keep grinding lower.

When we truly are late in the cycle and business is softening, I would expect to see a collapse in the spread between the two series as has happened in previous recessions. As the chart shows, there is quite a bit of territory to cover before the two series reverse.

At this point in the expansion, when labor market health is not a concern, business activity takes on added importance. It’s healthy business activity that supports employment and in turn the expansion, so it’s something that needs to be monitored closely. For a services based economy like the U.S., the Institute for Supply Management (ISM) provides the best metrics of services industries in its Non-Manufacturing ISM® Report On Business® survey (NMI). ISM has been collecting services data since 1997 and has a robust data set to use for gauging the strength of services business activity.

As can be seen in the table, 2017 activity is outperforming its lifetime average and a comparable expansionary / bull market period in 3 of the 4 NMI components with the laggard being supplier delivery times. Supplier delivery times is also a questionable component at this point because of the advances in shipping logistics that has sped up supply-chain processes but is nevertheless still a component of the NMI.

Not only do we have strength in services, but the manufacturing side of the economy has also picked up in 2017. In fact, manufacturing activity in the U.S. and in Europe has picked up significantly in 2017 as seen in the Markit Manufacturing PMI data which shows that both regions are well in expansionary territory. The most recent May readings had the Eurozone Flash Manufacturing PMI at 58.4, a six year high, while the U.S. came in at 52.5, much improved from May 2016’s reading of 50.5. As the data is showing, the economy is on solid ground and not teetering on the brink of recession as the “late cycle” thesis implies.

All this is not to say that the data which I have cited here can’t be interpreted as reaching an exhausted stage or as topping out which would be a characteristic of a “late cycle” scenario. It clearly can be. However, when we take all the data in the context of the Trump administration and its significant pivot towards business-friendly policies, a foundation has been laid for future economic expansion. Also, the comparison of the current environment to the 1997-2000 period which ended in the bursting of the infamous tech bubble could certainly be interpreted as ominous. Except, this time around, we are not discussing cash burn rates of various companies because firms today are actually making money, and lots of it, in certain cases. Putting all this together, I would say it’s more likely that this “late cycle” narrative ends up being a virtuous cycle for several years to come.

4 thoughts on “Don’t fall for the “Late cycle” narrative”