As we get further into fall, a period that people consider particularly worrisome for markets as ghosts of the crash of ‘87, the Asian financial crisis of ‘97 and Lehman Brothers come back to haunt investors’ memories, it becomes very easy to lose sight of the factors that brought markets this far. That loss of clarity is then compounded by natural disasters like hurricanes Harvey and Irma and man-made ones like Kim Jong Un and terrorism. Yet, even with all these negative situations, stocks have continued to climb their proverbial wall of worry as the S&P 500 just finished at a weekly all-time high of 2502. So as markets sit at highs and pundits continue to pitch fear and the “late cycle” narrative, the data tells a different story.

The first item up for discussion, and something which is a pillar of all economic expansions and bull markets, is employment. While many different metrics exist for gauging the health of the labor market, the initial claims series is the most useful one with its hard data basis and near real time frequency. Unemployment claims data is an excellent gauge of changes in highly cyclical industries as claims are often a lifeline for many workers when a job ends. Looking at the long-term history of claims and assuming that the economy has reached most economist’s nirvana of “full employment” at various times since 1980, it’s safe to say that the labor market is indeed healthy. 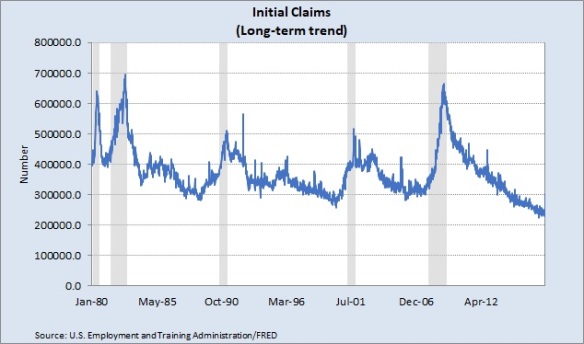 Then looking at what claims could do as we move forward, we can look at the data in the context of job openings to see a relationship that looks set to drive claims data even lower. 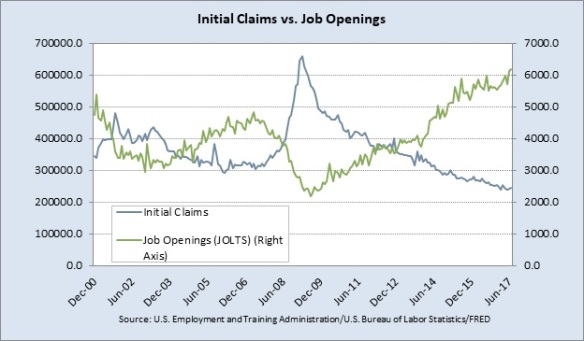 On Thursday, we got the highly regarded Philadelphia Fed manufacturing survey which saw nearly all of its components move up in September. The Philly Fed survey, along with its other regional members, provide a valuable and informed view of local economic situations around the country. September’s survey, which includes responses up to the 18th, saw a marked rise in new orders, shipments, and prices paid/received. The new orders component, which hit 29.5 in September versus its 2017 and lifetime averages of 25.9 and 9.4 respectively, is showing significant strength. 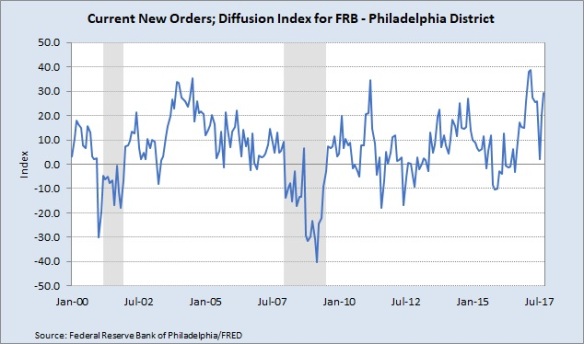 With new orders in a solid position, there would need to be a significant and prolonged downturn before even entertaining the notion of a recession.

Complimenting the Philly Fed data was the NY Fed’s Empire State Manufacturing survey which also showed healthy activity for September. The survey, which includes most data collected up till the 10th, saw both its general business and new orders components come in near cycle highs. 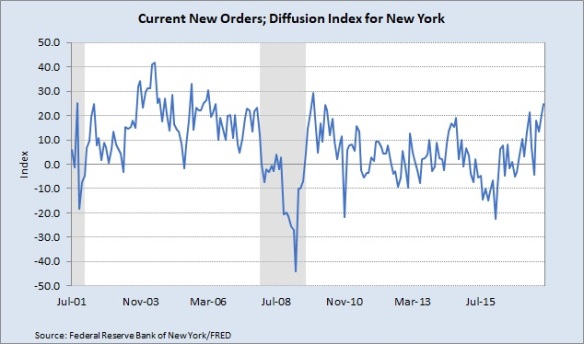 The report also saw upticks in its employment and prices components which helped drive those series towards cycle highs as well. We’ll get a look at more regional data this week when the Dallas, Richmond and Kansas City Feds all publish their reports.

On Friday, we got a look at manufacturing and services data in the Markit Flash reports for the Eurozone and the U.S. In the European data, we really couldn’t have gotten a more bullish report. The manufacturing PMI came in at 58.2, near a seven year high while the services component came in at 55.6 up slightly from August. Highlighting the overall strength of the Markit data were gains in its new orders and employment components. The report also cited significant employment gains and increased business confidence for the area. All in all, the report shows a level of activity such that the European economic situation should no longer be described as a recovery, but more so as being recovered.

In the U.S. report, data also showed healthy levels of activity in manufacturing and services with the services side resuming its leading role. The services sector saw healthy gains in new orders and employment while manufacturing was a bit subdued in comparison. Corroborating the rising prices seen in the regional Fed data, the Markit report cited the composite (both manufacturing and services) having its highest cost levels since June 2015 with manufacturing input prices hitting their highest levels since December 2012. Given the significant gains seen in manufacturing activity since late 2016, it’s understandable to see a slight deceleration now. The main takeaway here is that growth and a healthy level of business activity are occurring in the most important and largest sector of the economy, services.

All of the above data have contributed to companies being able to generate the strong economic activity and earnings to get markets to these levels. All these positive economic events are now helping to drive Q3 earnings and sales estimates higher as FactSet puts forth in their September Insight report. Looking at the market at a historical valuation guidance, we can see that on an earnings multiple basis, we are not in uncharted territory. 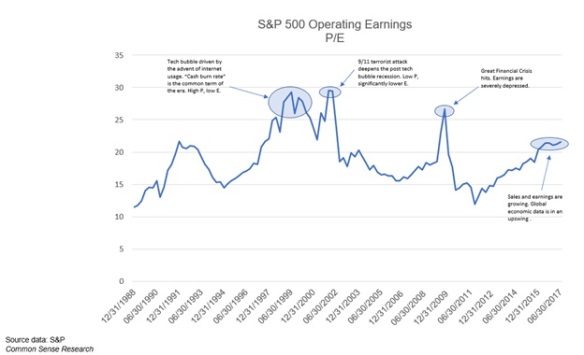 In fact, if we were to see current S&P Q3 and Q4 earnings estimates realized at today’s multiple, the S&P would finish the year at 2743, making for a very happy ending to this year’s market story.