“You can’t always get what you want..But if you try sometimes you just might find..You get what you need” are famous lyrics from the Rolling Stones that weren’t meant to be about markets, but they sure fit well after what was seen this past week. Markets came into October at lofty levels and primed for a fall after having worked through hurricanes Harvey, Irma and Maria and that manmade disaster Kim Jong Un. Even with all these terrible events and threats, equities managed to continue their march higher because the economic data never wavered. While pundits throughout financial media warned of impending crashes and doom, markets stayed focused on the data and finished last week with the S&P and Nasdaq at all-time highs.

With just over half of the S&P 500 having reported as of Friday, the market is indeed getting just what it needs, and that’s earnings. Strong results have come in across multiple sectors with industrials and technology leading the way. Major international firms ranging from CAT, MMM, UTX, MSFT, INTC and JPM are not only putting up great earnings but are also raising their guidance. Such confidence and visibility from market leaders like these only comes with a strong global economic backdrop. Thanks to global economic strength, the U.S. economy finds itself in an excellent position. The U.S. has the benefit of having 80% of our labor force working in consumption oriented services industries while the S&P 500 extracts roughly half of its earnings from manufacturing and export focused sectors like energy, materials and industrials. So as the global economy continues to strengthen, U.S. workers will reap the benefits from increased labor demand and wages while corporations earn significant profits domestically and internationally. In other words, exactly what the market needs.

While many analysts and strategists have been caught off guard by the strength of markets and the economy, the regional Fed data available has been showing the strength for quite some time now. The reason it’s been missed is because it’s “soft” data derived from surveys that many analysts are quick to discount as not valuable since some have short histories or just flat out aren’t paid attention to. Regardless, regional Fed data, as discussed in this space often, has been presenting evidence in support of the bullish narrative all along. The data has shown how activity has not only accelerated over the past couple years but has also gone virtually uninterrupted from the hurricanes and, most importantly, is showing strength as firms look ahead.

Leading the regional data is the highly regarded Philadelphia Fed which has been putting out its manufacturing survey since 1968 and is also considered an excellent proxy for national activity. The future (6 months out is the standard for all Fed data presented) expectations chart shown below shows just how historically strong the data is and how long it’s been at these levels. The chart also shows that we would need to see a significant trend change in the data before a recession becomes likely. 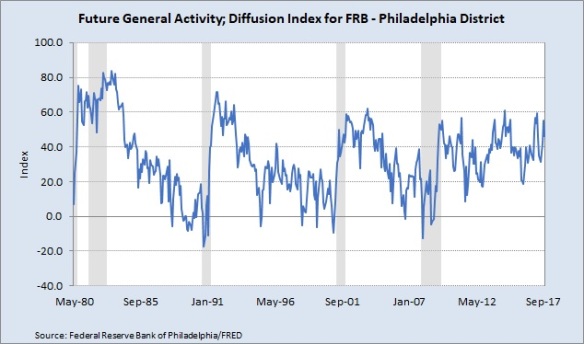 Then we have the Kansas City Fed manufacturing survey whose data goes back to 2001 and covers Kansas, Colorado, Nebraska, Oklahoma, Wyoming and the northern half of New Mexico. The future expectations index here just hit its series high.

The Kansas City and Dallas survey discussed next are quite telling, as one would expect, about the relationship between energy prices and business activity in those neighboring regions. The chart shows how expectations took a dramatic tumble at the same time oil prices did but have since rebounded just as oil has. Given the stability we’ve seen in oil prices and OPEC’s stated commitment to keeping production in line with demand, a repeat of the 2016 collapse in oil prices is highly unlikely. That said, we can see why future expectations look so positive for the area.

In a true testament of resiliency, we have the Texas Manufacturing Outlook Survey put out by the Dallas Fed, whose expectations stayed strong throughout the hurricanes. This survey has the shortest history of the group just going back to 2004 and covers the state of Texas. The data, which was collected well after Harvey, October 17-25, shows just how unfazed and upbeat manufacturers are.

Part of the strength of future expectations in the Dallas District is from the explosive growth in oil exports. Port capacity and the export supporting infrastructure is already being stressed at current levels and will soon need to be upgraded. These upgrades along with maintaining normal domestic production will all help to strengthen business activity in the region and dramatically increase CapEx spending.

Moving on to the Richmond Fed’s Fifth District Survey of Manufacturing Activity which covers Virginia, Maryland and The Carolina’s and dates back to 1993, we see a similar story of strength in future expectations. The Richmond survey doesn’t have a future component for its general index, so the new orders component has been substituted. Again, we see a data series moving towards its highs that would still need a lengthy reversal period before approaching recession levels. 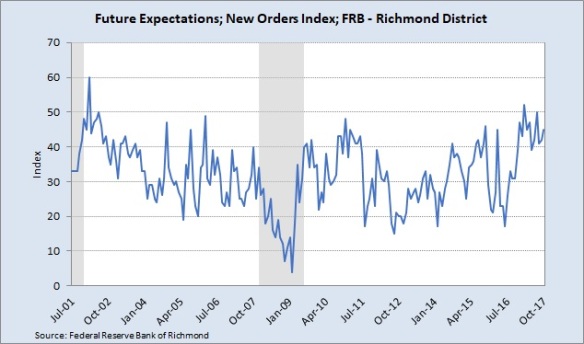 Rounding out the group, we have the New York Fed’s Empire State Manufacturing Survey which goes back to 2001. The data here reflects the same trend we’ve seen in all the other regions, which is that manufacturers are upbeat about the future.

It can be seen in the above charts that the strong forward guidance being presented this earnings season so far is corroborated by strong domestic expectations.

Given the strong business expectations at a regional level and what we are hearing from the heads of major international firms, it looks like it’s full speed ahead as we head into the end of the year. As of Friday’s close, the S&P was trading at 21.6x blended Q3 trailing twelve month operating earnings. Based on current Q4 earnings estimates (as provided by S&P) and today’s multiple, the S&P would be trading at 2,722 in early 2018. Given the strengthening of the global economy, we could certainly see multiples expand from here as investor sentiment picks up. During the 1997-2000 bull market run, the S&P 500 traded at an average of 25x operating earnings. Considering that the technology boom of today is being driven by actual earnings and not just clicks, this market just might also get what it wants.