Is the bull back? Did he ever leave, or was he just ignored while investors focused on various sources of volatility such as trade wars, rising interest rates and Italian banks? Whatever the case, investors lost sight of all the positive market drivers that have been in place and still support the bull narrative headed into 2019. While prudence demands looking at all risks, it’s focusing on actual earnings and economic data which is the key to navigating stormy markets. Even though spiking Italian bond yields and the possibility of a Euro collapse can be distracting, the fact that the S&P is currently trading at 17.2x 2018 blended operating earnings and just 15.5x 2019 estimates is what should be investors’ focus looking into next year. Given that the Q3 earnings theme was about a strong dollar driven sales headwind being offset by robust business demand, we can see top and bottom line growth gearing up for solid gains as FX risk can be managed in the short term but also reverses itself over the long term. The important point here is that solid business demand is not just reflected in healthy earnings and guidance but also in business activity metrics. The highly regarded ISM Manufacturing and Services surveys have shown a strong expansion all year with October’s data no exception. In fact, ISM research shows that October manufacturing and services data translate to 4.5% and 4.1% respectively annualized GDP growth versus the 3.5% Q3 growth just reported. Then we have the NFIB Small Business Optimism Index which is right near its all-time highs. Small businesses have responded very well to tax reform and deregulation by increasing their hiring and CapEx spend. Even as the “late cycle” narrative has just morphed into an “end of cycle” story, business activity and guidance show that we are still in an expansionary period. 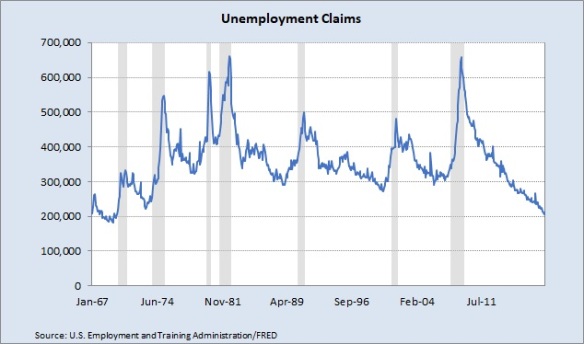 Weekly unemployment claims are a great metric for labor market health thanks to its near real-time frequency and hard data basis. Because claims are often a financial lifeline for cyclical workers and are filed as soon as a job ends, we can look to this series to see any softening of the labor market. Thus far, there are no signs of that. Furthermore, if we look at claims data in the context of job openings (JOLTS), we see that claims can still grind lower and break below the 200K level. 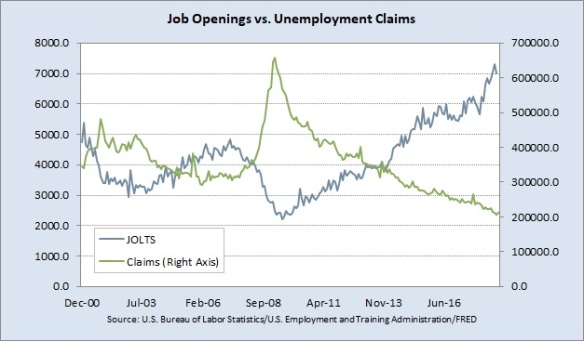 The JOLTS data series, one of former Fed chairwoman Yellen’s favorite metrics, does a great job in capturing the liquidity of the labor market. Greater liquidity in this context is defined by the high level of openings and voluntary turnover (quits) we are seeing. 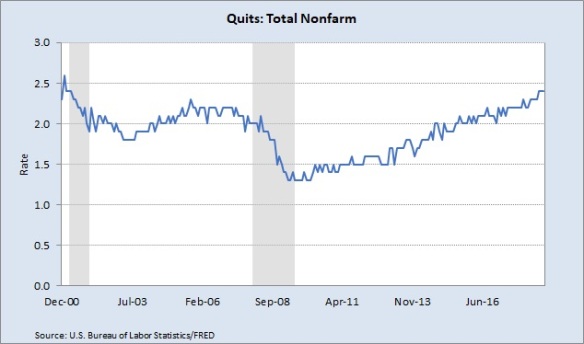 Overall, the data is showing that the labor market can tighten further, wages can still rise, and the economic expansion can continue.

With a solid economic backdrop in place, we can now focus on the actionable part of the situation which is market valuation. While determining any valuation is arguably more art than it is science, investors can still use a historical multiples analysis to get an idea of fair valuation. So, the question becomes what is a comparable period to this market and why?

With technological advancements being the fundamental driver of this economic expansion, it’s easy to draw a comparison to the market / expansion of 1996 – 2000 when the internet came to life, with the major difference today being that companies are actually making money! That said, today’s advancements like fracking, open source software (OSS), smart phones, cloud computing and artificial intelligence have had an even greater impact on today’s economy than what drove the original tech bubble of 2000. Aside from actual earnings, the subtle and powerful differences that make the current expansion so much stronger, sustainable and yet misunderstood are the changes which technology has had on inflation and productivity.

While consumers have enjoyed lower energy prices thanks to fracking and the U.S. going from being the world’s largest consumer of oil to the largest producer, it’s been advancements in information technology that have had the most profound effects. Lower costs of various consumer goods and services thanks to advances in technology and manufacturing processes can be easily seen in retail sales data while the much more permeating effects of technology like OSS remain difficult to measure. OSS is software whose inner workings are made public and can be enhanced by the public with many applications being available for free. OSS is being used for the development of E-commerce platforms, big data projects and many other applications across multiple sectors.  Big data includes the development of artificial intelligence and something near and dear to the investing world, algorithmic trading. Investment banks have groups who use OSS applications like Python to develop trading and various analytical applications. Python, which is free to download and use, is one of the most powerful and easy to use programming languages in existence. Banks are essentially able to create incredibly complex trading algorithms and data management tools which can be used across multiple asset classes for trading and research at a minimal cost. Thus, in the case of investment banks and other corporate users developing applications with Python and other OSS, productivity has been dramatically enhanced at minimum cost. As per the BLS, productivity is measured as the units of output produced per units of input, with input defined as the cost of goods and services used in that input. Which begs the question, what happens to productivity when an input cost is zero? Is it undefined? Granted, there are always some costs associated with something like OSS, but the point here is that with the nearly unlimited potential and scalability of something like OSS, the productivity achieved today is exponentially greater than anything of the past and has been generated at a fraction of the cost. It’s because of technological advances like fracking and OSS that we have not had run-away inflation in many goods and services and why traditional productivity metrics have failed to capture the phenomenon of advancements like OSS. The net effect of these technological advances are structural changes to inflation and productivity which have caused a unique situation of having a strong and sustained economic expansion with subdued inflation and increased productivity. This occurrence has allowed the Fed to not have to act as aggressively as they previously would have at this point in the cycle. So, it really is different this time.

How we view the Fed and inflation are critical in determining whether there will be earnings multiple expansion or contraction going forward. Given that rising rates are an accepted reason for multiple contraction, that can certainly help explain the slight S&P multiple contraction so far this year while actual 2018 S&P operating earnings have risen 27% from 2017. Being that it’s correct to argue that higher rates can contract multiples through a greater discounting of future earnings, it also opens the door to looking at the overall rate sensitivity of equity which is known as equity duration.

Equity duration was presented in work from Leibowitz, Sorenson, et al back in the 1980’s as part of portfolio / risk management work and is still used today. That said, one principal of duration is that as more capital is returned to the investor, the less sensitive an investment will be to changes in interest rates. For example, bonds that have a higher coupon rate will have a lower duration while the opposite can be seen in zero coupon bonds which have significant sensitivity to rate changes. In equities, return of capital comes primarily through dividends and stock buybacks. As we all know, since the financial crisis, stock buybacks have become a staple of corporate actions. Since the crisis, Yardeni Research estimates that S&P 500 shares outstanding have fallen by roughly 8% since their highs in 2010 while the dollar amount of dividends has more than doubled for the same period! With the significant increase in buybacks and dividends, an argument can be made that equity duration has been lowered, thus making equity prices more resilient to a rise in rates. Looking at the rise in rates we’ve had and that we’ve only seen a slight contraction in multiples while equity prices have still managed to hit all-time highs, the idea of a lower duration market is supported.

All this said, what markets and investors are dealing with today is an unprecedented combination of economic growth and technological advances that have changed the traditional business cycle and its metrics. Even without technology, the transition of the economy from a manufacturing / export base to that of a services / consumption one has had the effect of lengthening business cycles as the economy has become more self-sustaining. Now that we have made such significant technological advances, the business cycle, interest rates and their long-term behaviors need to be reassessed.

Taking a potentially less aggressive Fed along with the current economic environment, markets are set up for earnings and multiple growth going forward. A less aggressive Fed will take strength out of the dollar and put developed and emerging markets at ease. We can already see a more dovish Fed taking shape in recent remarks from Fed Chair Powell. Powell has acknowledged the strength of the economy, its great potential and, more importantly, his desire to support the expansion. Investors should take solace in the fact that we have a Fed chief who is taking a very pragmatic approach to monetary policy and will not just dogmatically raise rates as the traditional Fed playbook would dictate. A dovish Fed and a lower duration equity market is a great setup for 2019.

With current S&P operating earnings estimates for 2019 and a 20x multiple which is still 3x less than the average 23x multiple enjoyed throughout 1996-2000, the S&P 500 would trade  at 3,515 or about a 30% gain from today. While this may seem overly bullish given all the “end of cycle” rhetoric going around, it’s not if investors simply listen to what the Fed chair has to say and what the actual data is showing.  Earnings multiple and economic expansion are on deck for 2019 and will get investors’ attention while the “end of cycle” narrative goes into the recycling.

At the time of this posting, the author has the following positions: None

Marco Mazzocco is an associated member of T3 Trading Group, LLC (“T3TG”), a SEC registered Broker-Dealer & Member of the NASDAQ PHLX Stock Exchange. All trades made by Marco are placed through T3TG