“Beauty is in the eye of the beholder” is a famous line from an old Irish novel written by Margaret Hungerford that lends itself well to our current market and, of course, to the St. Patrick’s Day just passed. While Hungerford used the phrase to allow her novel’s character to respectfully and wisely describe another character’s appearance, we can use it to find value in today’s market that many others choose not to see. With the S&P just getting its head above a range that’s been in place since mid-October, we could now be at the beginning of a run to new highs. So, with many financial media pundits focusing on the always imminent recession, investors can look at the data to see some rather attractive aspects of this market.

Beginning with the foundation of every economic expansion, we have employment. A couple metrics that have been showing a strong labor market are weekly unemployment claims and JOLTS data. As was previously and more deeply discussed in The Bull’s Case for 2019 , weekly claims are a near real-time metric where any kind of broad sustained economic slowdown would show up first. Until claims retake the 300,000 level, recession talk is simply unwarranted. Then, looking at claims along with job openings, we get a much more robust picture of the labor market. JOLTS data which was just released last week saw three major BLS industry groupings, education and health services, leisure and hospitality services and mining and logging hitting their series highs while total openings came in at just under a record high. 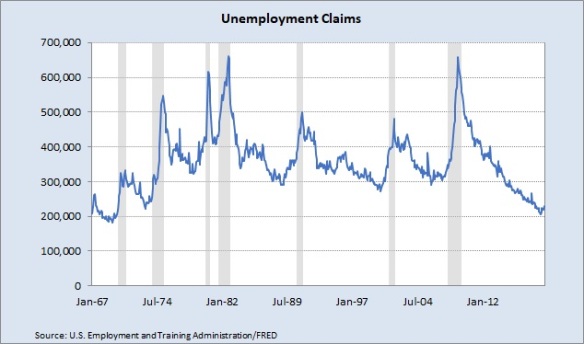 The above data is showing a labor market that is poised to tighten further and push wages higher, which is a combination that reinforces the virtuous cycle of employment, consumption and economic growth. Especially indicative of the growth in consumption is the record level of openings in the leisure and hospitality services sector. Unfortunately, many in financial media are quick to discount the L&H sector as being low wage, low value jobs. That is a very myopic view which misses the importance of these roles and what they say about the overall economy. Setting aside the facts that L&H service positions can be rather lucrative in certain locales and that a person’s work ethic can make any role valuable, an increase in L&H employment reflects an important aspect of a growing economy which is strong consumer discretionary spending. Consumer spending is one of the main drivers of economic growth while the discretionary sector alone accounted for nearly 10% of S&P operating earnings in 2018.

Next, we have growth in mining and logging employment where we are seeing the renaissance of the American energy industry taking place. With the US moving from being the world’s largest consumer to the largest producer of oil, the economic impact has been significant and underappreciated in terms of future CapEx spend and employment opportunities. Thanks to fracking, we have unleashed massive reserves of not just oil, but also natural gas. The US is now on its way to becoming a dominant player in the nascent liquified natural gas exporting business. In fact, the EIA estimates that LNG exports are expected to double by the end of 2019, a move that would make the US one of the world’s top exporters. In short, the liquification of natural gas allows significant amounts of energy to be shipped throughout the world. However, the process of converting gas to liquid and back again requires substantial investment in equipment and labor. Those investments are currently underway throughout Texas, Louisiana and Georgia. With China being the world’s second largest LNG importer, LNG investments are sure to be looked upon favorably by the Trump administration. Given all of this and that consumer discretionary and energy sectors make up 13% of 2019 S&P earnings estimates, it’s easy to see some appealing opportunities if one chooses to.

Moving on to the business activity that supports employment demand, we can look at the highly regarded ISM Report On Business that produces a monthly analysis of services and manufacturing activity. Given that the US is a services and consumption based economy, the ISM Services report is a great resource for gaining insight on industry factors like new orders, prices and employment. The February report came in with strong headline and internal components. In fact, the new orders component at 65.2 (readings > 50 = expansion; < 50 = contraction) was the 4th best print in series history while the overall business activity index had its 6th best print in history with a 64.7 reading.

On the manufacturing side of things, we see healthy expansionary business levels but not as elevated as the services data.

This is understandable as the US economy has long since transitioned from its manufacturing / export base to a highly sustainable services / consumption model. However, since a revival of our manufacturing industries has been a focus point of the Trump administration, we have seen a clear uptick in manufacturing activity since the election.

This pickup has been a welcomed additional tailwind for the economy, but it’s also not something that could really derail overall growth should it subside in the future. Since the top non-agricultural goods exports are in aircraft, industrial machinery, auto parts and high-tech goods where the US is often the only or best supplier, US companies are well positioned to survive economic slowdowns.

Using the ISM provided GDP equivalent, blended services and manufacturing data is showing a heady 3.5% growth rate thus far for Q1. With services and manufacturing data both well in expansionary territory, we see more evidence as to why recession talk is inappropriate and that the economic picture is rather eye-catching for those open to seeing it.

Now, as we head into the end of Q1 with solid economic fundamentals in place, we need to look at overall market valuation. The S&P is currently trading at 17x 2019 operating earnings and 18.6x trailing. 2018 saw earnings multiples contract with the Fed raising rates and market expectations for further tightening. As we have seen already, the Fed is most likely on hold for all of 2019 with maybe one rate hike if inflation were to move meaningfully higher. As I have stated in prior writings, thanks to significant advances in technology, we are enjoying a strong economic expansion with subdued inflation. With a dovish Fed in play for 2019, the dollar should come off its highs and simultaneously help the roughly 50% of S&P earnings generated from non-dollar sales and also give a bid to EM risk assets. With that said, 2019 should see multiple expansion along with earnings estimates being raised in the second half of the year. Even a 19x multiple on today’s estimates would add 10% to Friday’s S&P close. Given that the current expansion is coupled with benign inflation, low rates and the most pro-business administration arguably ever, there is clear justification for earnings growth and multiple expansion. Assuming that China trade issues slowly work out through the year, this market could really turn into something beautiful for the bulls in the end.

Marco Mazzocco is an associated member of T3 Trading Group, LLC (“T3TG”), a SEC registered Broker-Dealer & Member of the NASDAQ PHLX Stock Exchange. All trades made by Marco are placed through T3TG