Sustainability is a popular word in today’s media and is a part of an abundance of freshly-coined terms which deal with climate change and how we can all be better stewards of the earth. And in the highly charged social environment we are in, some of the ways being proposed to achieve this environmental sustainability would be to end the use of fracking, fossil fuels and the partaking of our favorite bovine. While the merits of these proposals are outside the scope of this discussion, one thing is for sure, and that is that a hurried implementation of them would be an end to our economic sustainability. Now, putting aside the frightening thought of a meat-less football season, we can look at the strength and sustainability of our economy that was evidenced in this past week’s data. With financial media doing its best to keep pushing the recession narrative, which so many have predicted for so long and that it’s still right upon us, the actual data shows the contrary. In reality, what we are seeing is the resiliency and sustainability of our modern services and consumption based economy.

Unfortunately, the term services economy is usually thought of as being limited to the leisure and hospitality sectors when it actually includes technology, finance, education, healthcare and others. The primary reason why we have enjoyed such a long expansion is that our economy has moved away from a manufacturing / exports base towards a services / consumption one. By doing so, the economy has become more sustainable and less susceptible to exogenous economic shocks which makes for longer business cycles. The chart below shows the consistent growth and smoothness (sustainability) of services versus goods-producing employment throughout this transition. 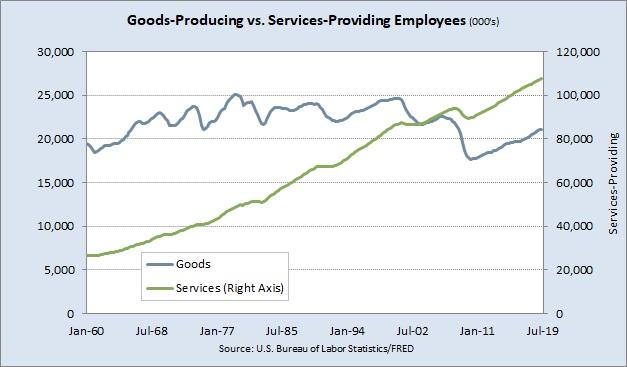 That said, if we group the existing NBER business cycles to reflect this transition, a transition which is supported by the dramatic growth in services employment, we can see how the average business cycle has significantly lengthened.

In addition to the dynamics which have supported a longer cycle, we are also seeing an evolution of the services labor force into an even higher skilled and sustainable one. For example, in the August employment report there was a loss of 14,800 General merchandise store jobs and an addition of 14,800 Professional and technical services jobs. This is not to say that people are simply switching positions but that there is an overall transition occurring in the labor force as a result of changes in business trends. 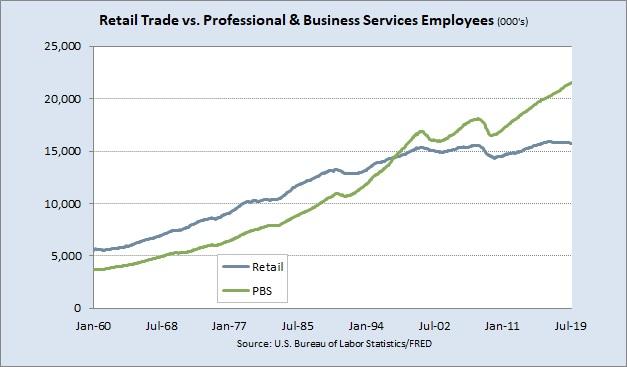 Then, as the table below shows, in the top five employment growth areas, four of them are services sectors which also account for nearly 55% of private sector employment by themselves. This is all important to note because financial media tends to only point out the job losses.

So, while some scoffed at Friday’s employment report as being weak, when the data is taken in the context of a labor market at full employment, job openings (JOLTS) still near all-time highs, unemployment claims near all-time lows, and with a 3.2% rise in average hourly earnings, the 130,000 jobs created is just fine. It’s the details and trends in the report where the true strength lies. 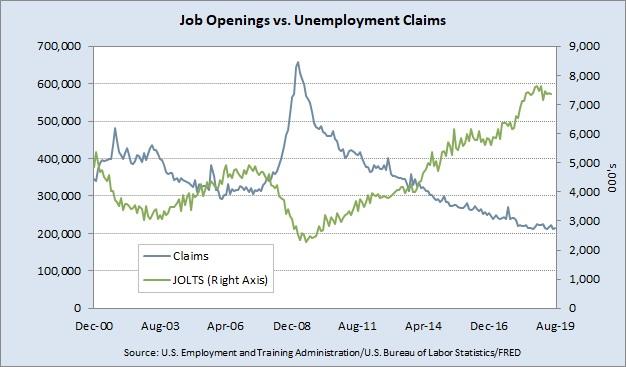 Since services account for just over 80% of total private employment, we see why the strong ISM Services (NMI) report we got last week is so important, especially versus its manufacturing counterpart. The August NMI came in with a solid headline reading of 56.4%, up 2.7% from last month and handily beat expectations. The new orders component came in at its best reading of the year at a very high 60.3% with various types of labor being reported in short supply. 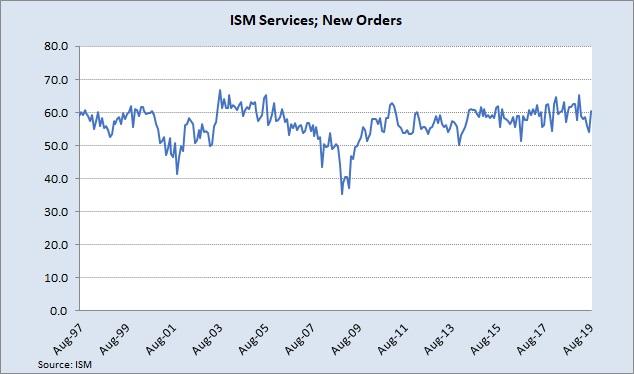 Even though some survey respondents expressed concerns about tariffs, the overall commentary was describing a positive and growing business environment. Taking this report along with the strong services employment data and low weekly unemployment claims, we see how healthy and resilient the US services / consumption based economy is. In the absence of trade war noise, it’s this data that can propel equities higher.

As for the ISM Manufacturing (ROB) report that spooked the market last Tuesday, we need to understand how ISM calculates its indices to see what could have driven the drop into contraction. Basically, ISM weights all the responses it gets by the sector’s contribution to GDP. In this month’s report, we see that the drop in the PMI was primarily driven by drops in new orders and employment. Within those two components, it was the Transportation Equipment sector that was the most heavily weighted sector with the most negative responses. Given the issues plaguing Boeing and its supply chain, it’s likely that it’s these idiosyncratic issues that are especially weighing on the indices. With August car sales having come in well so far, it makes Boeing related issues a heavy favorite to be the culprit for the ISM decline. With that said, we can see from other survey respondents that tariffs are an issue, but that businesses are still trudging along. The takeaway here is that it’s a given that the manufacturing side of the economy will always be especially susceptible to external forces but thanks to American product superiority in many of our exported goods, even that decline will be limited.

The question becomes, so now what? The S&P is trading 22x trailing earnings and 17.9x 2020 estimates which have already come down 5% since March due to trade ware fears. Those valuations are arguably low given the low rate and inflation outlook. We also have a Fed that is committed to cutting rates with Powell stating that he was concerned about low inflation in his remarks from Switzerland on Friday. With an easy Fed, the stage has been set for a strong market and potential multiple expansion. Now, the obvious worry left is China.

When we look at the deteriorating economic conditions in China, the known issues alone are clearly serious. The PBOC finds itself facing inflation as a result of its weakening currency along with a shortage of USD’s from reduced export revenues. The PBOC needs USD’s to pay for commodities, USD denominated debt and for other external funding needs like its One Belt One Road projects. From a purely financial perspective, it behooves China to reach a deal because without one, F/X issues could put them in dire straits. Then the job losses from supply chains leaving adds the additional threat of civil unrest from unemployment which is something we know Beijing has no appetite for.

Next, there are purely domestic issues like the African swine flu outbreak and the Hong Kong riots. China is the world’s largest consumer of pork and has seen its hog population reduced by at least 30% thanks to the ASF outbreak that has been out of control for over a year. Because of this, pork prices have spiked over 70% and food importers have had to import beef from Australia and South America. Given Beijing’s history of covering up issues, it’s most likely that the ASF outbreak is much worse than what has been reported. This issue is also made worse by a weaker Yuan.

Finally, we have the civil unrest in Hong Kong that could result in China losing its crown jewel developed market asset and its best connection to the financial world. Should there be military action that unofficially makes Hong Kong the same as China, then Hong Kong would no longer be trusted as a global marketplace and the loss would be devastating to China’s financial future. This is why we have not seen full scale military operations yet and why there is hope for a peaceful solution.

However, even with all of these issues, it could still be possible that China will stay true to its dictatorship history and crush any rebellion and let its people endure any hardships as long as they may last. The reality of all these issues may have been what led to Beijing’s willingness to reach out about a trade deal last week, which makes it seem that the moderates in Xi Jinping’s inner circle may be gaining some traction and cooler heads may prevail. We will have to wait and see what comes out of the planned October meetings. So, given current market valuations, a dovish Fed and a healthy economy, there’s plenty of justification for the market to sustain its upward path, but the ability to withstand the headwinds of a prolonged trade war remains to be seen.

Marco Mazzocco is an associated member of T3 Trading Group, LLC (“T3TG”), a SEC registered Broker-Dealer & Member of the NASDAQ PHLX Stock Exchange. All trades made by Marco are placed through T3TG. Marco has no positions in Boeing.