While mystery has always been a great seller to the masses in terms of books, movies and TV shows, it’s unfortunately also a top seller in financial media. We can see this with all the frenzy surrounding the dreaded inverted yield curve and this past week’s repo market mania. Both were events presented as mysterious and nefarious in nature, but when analyzed with some technical knowledge and common sense, both become perfectly explainable and are not actually harbingers of the next recession or crisis. In reality, both events are just a result of supply and demand for different assets in their respective markets by participants conducting normal business. So, by working through these “mysteries” and having the FOMC meeting behind us, we can now focus on the positive economic data that was out last week which is what will ultimately drive this market higher.

Looking at the situation of the inverted yield curve, we can break this down into two basic parts. First, is the Fed pushing up short term rates through its policy decisions and second, is the bond market pushing down long-term rates from sheer demand for treasury securities. 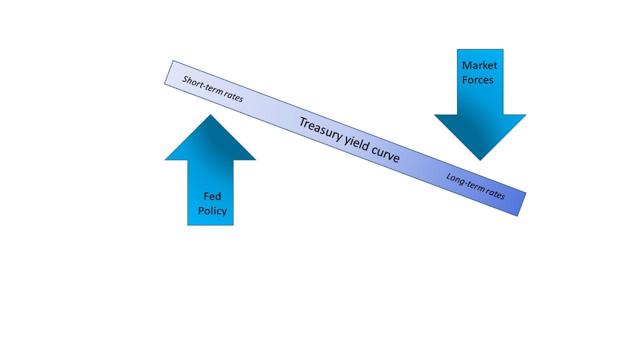 The front part of the curve is the easiest to explain with the Fed having embarked on its rate hiking cycle back in December 2015 and driving the Fed Funds rate from essentially zero all the way up to the 2.25-2.50 range In December 2018 and thus taking market based short-term rates with it. So, while the Fed was performing its economically justified policy adjustments on the front end of the curve, the rest of the curve was being held down by a confluence of forces: 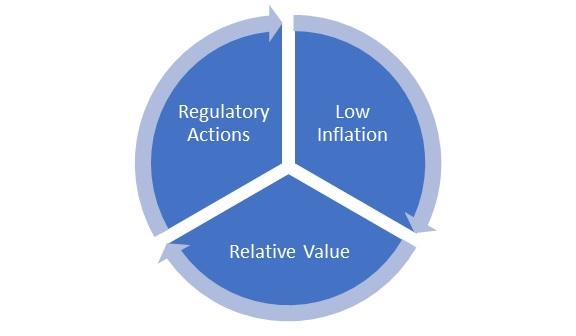 As a result of the financial crisis, significant regulatory actions were taken on financial institutions in order to mitigate systemic risk. Regulatory actions like the Dodd-Frank Act and Basel 3 Accord have forced institutions to hold a larger proportion of their assets in high quality liquid assets (HQLA) so that in the event of another crisis, they could be more easily liquidated to raise capital and not become a tax payer burden again. As seen in the chart below, these higher quality holdings have nearly doubled since the crisis. 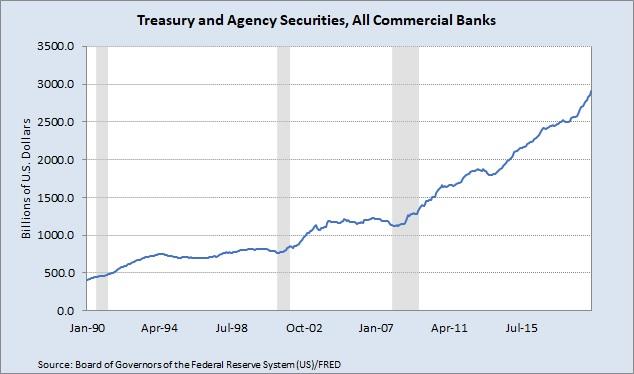 Because treasuries are already considered a vital component by institutional asset managers due to the treasury market’s unparalleled liquidity, the additional regulatory demand has generated a significant source of downward pressure on rates.

Next, we have an interesting situation of persistently low inflation helping to keep rates low which is unique to this economic expansion. In the past, economic expansions that approached the length of our present one have always been associated with rising inflation and sometimes very strong inflation. However, thanks to recent technological advances ranging from fracking, smartphones and open source software, to name just a few, there has been an unprecedented increase in productivity without an equivalent increase in prices. With fracking allowing the US to go from being not just the world’s largest oil consumer to also being the world’s largest producer, the reduced energy costs have helped anchor inflation while providing significant benefits throughout the economy. These technological advances along with a consumer shift in preference towards experiences versus goods has also helped to keep prices in check. It is this persistent lack of inflation that has been an ongoing point of discussion at the Fed and also a stated reason for ending this hiking cycle at the January 2019 FOMC meeting.

Lastly, we have the concept of relative value which has been another source of downward pressure on rates. Relative value describes a bond investors preference to always seek the highest yielding (return) bond with the best credit (likelihood of receiving that return) in a related group of bonds. So, in the case of treasuries, the comparable (relative) bonds would be those of similar developed sovereigns, which is primarily the European Union. With some EU sovereign yield curves having gone mostly negative and even being less credit worthy than the US, it’s easy to see why the US is such a great relative value and why foreign holdings of treasuries have risen significantly since the end of the crisis. 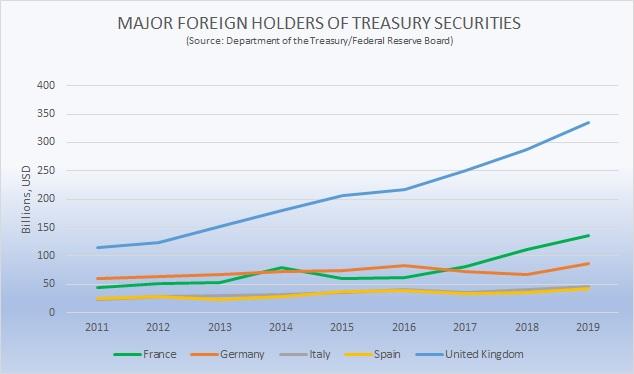 Thus, by taking the confluence of forces acting to keep long-term rates down along with Fed policy changes pushing short term rates up, we can see why the yield curve was literally pushed into inversion by various market participants and not by omniscient investors who had “divined” that a recession is imminent. Even research which concludes that yield curve inversions precede a recession by some amount of time are spuriously correlated at best because of the significant events that happen in that time span that do actually cause a recession. All of this is not to say that yield curves do not provide any information because they definitely do. Rate curves are the fundamental basis for valuation models across multiple asset classes and are an invaluable economic metric. However, thanks to global quantitative easing and low inflation, rates have been anchored in such a way that some of the curves’ descriptive ability has been muted.

Moving on to our next mystery, let’s look at the spike in overnight (REPO) funding rates that occurred last week. As a quick primer in its most basic form, the repo market is where investment banks and other leveraged participants secure funding for their trading and investing activity. The repo market allows institutions with excess cash, like money market funds, insurance companies, corporations, banks and sovereign wealth funds to lend that cash to institutions that need it on a daily basis. These cash loans are collateralized by high quality securities like treasuries and are grouped into a category called general collateral (GC). For this exercise we will only refer to the spike in GC rates even though there were spikes across the spectrum of money market rates. Here is a brief history of GC rates from before last week and through it: 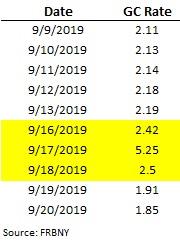 With some definitions and history out of the way, we have an understanding as to what happened. Now, the question is why did it happen? Similar to the confluence of forces that helped drive the yield curve inversion, there were several issues that came together to drive the spike in GC which could have been avoided had the NY Fed been more in tune with the markets. It turns out that the immediate cash shortages were driven by corporations withdrawing cash from the market to pay for tax liabilities and newly auctioned treasury securities that had to be paid for by various investors. There was also speculation that Saudi Arabian related funds withdrew cash in light of the bombings over the weekend. Then, on a larger-time frame, cash has been regularly drained from the market as a result of Basel 3 regulations which went into full force in January and that essentially forced global systemically important banks (G-SIBs) to hold enough cash to be able to cover a 30-day period without any need for funding in the event of another crisis. As things unfolded on Monday, the NY Fed was able to get its processes running to add the needed liquidity to the market and the situation was eventually fixed. But before the NY Fed was able to remedy things, financial media had already begun speculating that this situation was a redux of the spike in funding rates that happened during the crisis and that a new crisis was upon us. However, the major difference is that the funding problems back then were driven by the sudden introduction of counterparty risk into a market where it was previously inconceivable that a major US investment bank would become insolvent and that some collateral might actually be worthless. All one had to do last week was look across different asset classes to realize that this funding issue was limited in scope because other markets were functioning with a risk-on tone to them as opposed to the total calamity that existed during the crisis. It’s funny how media always seems to fill in the knowledge gaps with fear.

Throughout all the wild swings last week that started with what looked to be a significant market drop due to the Saudi Arabian oil field bombings, there was still some good news delivered. We got a strong industrial production (IP) report for August which also supports the idea that the weak ISM manufacturing reading earlier this month was a one-off driven by Boeing related issues. The IP report saw strength in business equipment, construction supplies and mining output. Then we had a Philadelphia Fed manufacturing report that showed healthy readings in new orders, production, shipments and employment data. There was a jump in the prices paid / received data in both current and future expectations readings that could be reflecting tariff-related effects, so that will have to be monitored. Given the strong IP report and solid Philadelphia Fed data for September, a rebound in the national ISM and Markit manufacturing surveys could be in store for September. On top of the solid manufacturing data was a second month in a row of a pickup in existing home sales (EHS). EHS, which account for 90% of total home sales saw increased buyers taking advantage of lower rates. The continuing lack of inventory is still holding sales back though as the market awaits homebuilders to complete new projects. With mortgage lending standards significantly stricter than what they were back before the crisis, the economic health and sustainability of purchasers today is something to note as an additional tailwind for this expansion. Last, but certainly not least, we got another week of historically low unemployment claims. And unlike the inverted yield curve, weekly unemployment claims are a reliable recession indicator. This week’s claims came in at an historically low 208,000. We need to see that number get above 300,000 and stay there before we start taking the R-word seriously. Overall, the data from last week indicates that the soft spot the economy had throughout the summer is firming up as we head into fall. 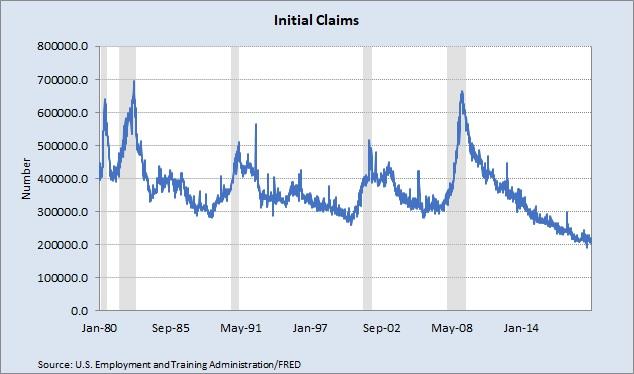 Having worked through the inverted yield curve and repo market madness we’re now ready to face a new week with earnings season right around the corner. We have plenty of A-list economic data to look forward to and what is certainly no mystery, more China trade war news to swing the market back and forth.

Marco Mazzocco is an associated member of T3 Trading Group, LLC (“T3TG”), a SEC registered Broker-Dealer & Member of the NASDAQ PHLX Stock Exchange. All trades made by Marco are placed through T3TG. Marco has no positions in Boeing.