“That’s what makes markets” is an old Wall Street expression that describes how different perspectives of buyers and sellers come together to facilitate trading throughout capital markets. And just as perspectives of value vary for any given asset, so do perspectives on the economy. What shapes these views is an analysis of a number of different economic metrics which are framed by the analyst’s own personal biases. With there being so many different metrics available and with everyone having their biases, it’s easy to see why there are so many different views on the economy at any given time. However, there are two fundamental elements of any developed market economy that rise above biases and whose strength or weakness determines the economy’s overall health, and those elements are employment and consumption. To quote Keynes from his seminal book, The General Theory of Employment, Interest and Money, which dealt with the symbiotic relationship between employment and consumption, Keynes stated, “Consumption, to repeat the obvious, is the sole end and object of all economic activity.” With the idea that sustained consumption is the goal, it’s interesting to think that Keynes may have found the current US economy with its services and consumption based model to be the ideal economy. So, with market turbulence driven this past week by soft manufacturing and services data but coupled with strong employment data, we find ourselves once again facing economic crosscurrents. When facing these crosscurrents, it becomes critical to focus on the basics like employment and consumption and to also understand what is driving the negative data. Because, when we look at the soft manufacturing data from last week in the context of its own historical fluctuations and along with the strong employment and consumption backdrop, we see that the economy is in good shape and not falling into recession as financial media would have one believe.

Looking first at employment, we got another solid month of job growth in the September nonfarm payroll report from Friday. With the unemployment rate falling to 3.5%, a level not seen since 1969, the case for being at full employment has clearly been made. September job creation also saw a continuation of growth in the services sector and further refinement of services jobs into more sustainable and higher wage professional and business services (PBS) positions. 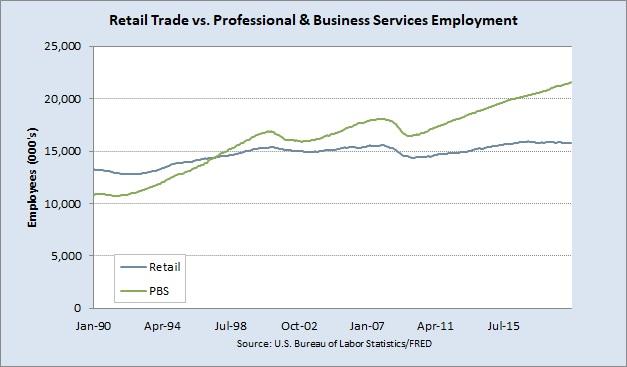 In addition to the gains in PBS, the leisure and hospitality services (LHS) sector also had strong gains for the month. Financial media is usually quick to discount gains in LHS jobs in a derogatory way as low wage / low quality jobs when what those gains really show are strength in consumer discretionary spending i.e., consumption. This strength is also evidenced in the strong earnings and guidance just announced by Cintas. Cintas’ primary businesses provide uniform rentals and facility services to the food services, hospitality, and gaming industries in addition to healthcare, automotive and others. Cintas had unadjusted/adjusted revenue growth rates of 6.7%/8.3% respectively, improved operating margins and raised the entire range of its revenue and earnings guidance. All of this helped send the stock to its all-time highs in September. When a company like Cintas, which has significant visibility into discretionary spending oriented industries, is comfortable raising its guidance, there is clear strength in those industries and by default strength in consumption as well. Then, just by looking at the most recent quarterly data of inflation adjusted personal consumption expenditures, we can see consistently positive growth. 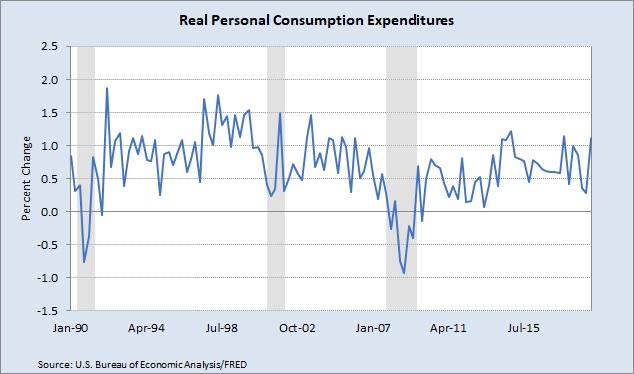 Thus, by taking the employment data, Cintas’ earnings and PCE data, we can wade through some of those crosscurrents and see that healthy employment and consumption are acting as strong support for this economy.

Now, lets look at the weak manufacturing data last week which caused quite a stir in the market. The ISM manufacturing report posted its second month in a row of contraction with 9 of 10 of its subcomponents all with readings under 50. All around, it was a weak report. Commentary in the report was also downbeat, citing trade war and tariff related issues as weighing on demand and sentiment. All that said, the most important factor to understand here is that manufacturing accounts for just 11.3% of GDP, while services are 66.6% based on final Q1 2019 GDP data. Also, many of our manufactured goods like jet engines, industrial machinery and other high-tech goods are not substitutable so the downside here is fairly limited. Next, when we look at the history of the ISM report, we see that a month or even several months of contractionary data do not always lead to a recession. For example, if we use the most recent multiple month contractionary period which lasted from October 2015 through February 2016, we see that the data rebounded, and recession did not ensue. Looking through series history, there are 6 more instances of 5 consecutive months of contraction where recession didn’t follow until at least a year and a half later.

To put that in perspective, there were 11 official recessions throughout series history and 4 of them had expansionary months that preceded the recession start. The point of all this is to say that there isn’t a statistically significant relationship between two consecutive contractionary months and a recession. Therefore, we really need to let the data play out quite a bit more before extrapolating anything serious about the manufacturing part of the economy.

On the services side of things, the ISM Non-Manufacturing (NMI) report came in down from last month but still well in expansionary territory with a 52.6 headline reading. Unlike its manufacturing counterpart, the NMI had 9 of 10 components all in expansionary territory with some having actually ticked up from last month. The commentary also had some references to trade war and tariff issues but still had an overall positive tone to it. One remark stood out in particular:

“While Chinese tariffs are understandable, they are impacting our supply chain decisions. We are actively pursuing alternate sources for our China-based production. At this point, we have not passed on tariff costs to our customers, but we are evaluating all options.” (Other Services)

This comment lends itself well to the subdued inflation that we’ve seen since the tariffs were started and the overall low inflation we’ve had in general. It also goes to the heart of the trade war and what will ultimately bring China to the negotiating table, which is significant job and revenue losses from supply chains relocating. That said, going back to the strong guidance from Cintas, we could certainly see a rebound in the NMI going forward. Taking both ISM surveys in the context of hard data like weekly unemployment claims, it’s more probable that the recent downticks in the ISM data are more a function of natural month-to-month volatility, which is inherent in those surveys, than it is a true sign of a momentum shift. As weekly claims continue to show significant labor market strength in a near real-time frequency, a significant downturn in business activity just hasn’t happened yet. 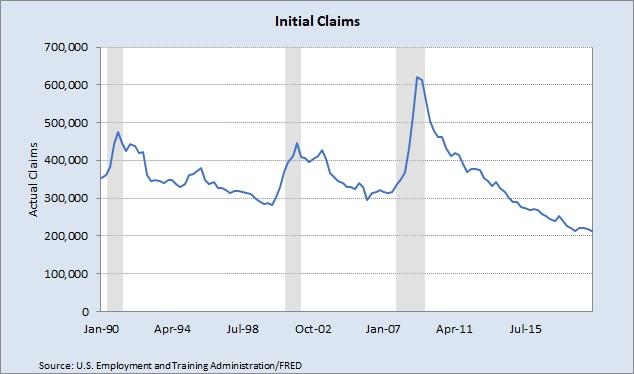 All in all, we see that the underpinnings of the economy are solid. Unfortunately, the crosscurrents of trade wars and tariffs continue to batter the market. So, for now, we can rely on the resiliency of the services / consumption based economy to carry us through the storms. However, should the situation with China continue to escalate, we need to be vigilant and flexible with our investment positioning so that we don’t fall victim to Keynes’ most famous quote: “The market can stay irrational longer than you can stay solvent.”

Marco Mazzocco is an associated member of T3 Trading Group, LLC (“T3TG”), a SEC registered Broker-Dealer & Member of the NASDAQ PHLX Stock Exchange. All trades made by Marco are placed through T3TG. Marco has no positions.